The season has come and to all those that have waited, the refreshing air from the north has finally shuttled in a few changes here along the Nature Coast. As you step out the door this morning you will probably realize that the dog days of summer are long gone along with all of the humidity that comes with it. Cooler mornings are the norm this time of year and as tough as it may be to get out of bed when it can be this cool, there is nothing more breathtaking than watching the steam roll of the Crystal River into the sky as the sunrises behind you. Now imagine breaking through the steam with a walk-the-dog topwater lure or a perfect presented fly. I would think that this would give you all the motivation you need to hit the water early this month. 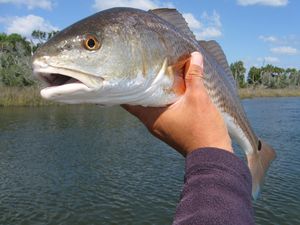 As much as we Floridians are enjoying this cooler weather (70 degrees), most inshore fish species enjoy the change in temperatures just as much. Redfish, Speckled Trout, Pompano, and Jack Crevalle are mostly cold hardy fish to begin with, meaning that they can with stand rapid changes in weather over a period of time. The key to being a cold hardy species is that you have to eat enough to with stand a period of cooler weather if that may be the case. As an angler the benefit of these feeding marathons means that more and more fish are susceptible to eating outside of their normal patterns. Where Redfish may only eat during a particular portion of the tide during the summer, this time of year they will take what ever prey they can get their mouths on in anticipation for the next cold front. These rapid changes in a feeding pattern are what makes the months of November and December so productive.

Speckled Trout also change their feeding patterns this time of year as well. For the rest of 2011 most Speckled Trout will be looking for bigger and bigger baits. This is the time of year when jerkbaits, topwater lures, and larger jigs work best. For instance, during a recent fishing charter I had the opportunity to have a banner day with my clients Chuck and Larry from Tennessee. We were casting large jigs along many of the structures located along the Crystal River, when we stumbled upon one large flat that was loaded with nothing but large Gator Trout. Most of the Trout we were catching ranged from 17-20 inches, but within 10-15 casts we had caught our 3 fish over 20” including a massive 5lb Gator Trout that had previously eaten a 7” Pigfish. 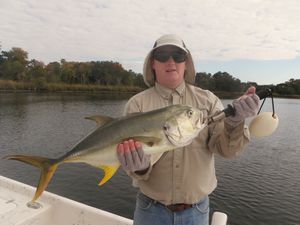 Another perk of the Speckled Trout fishing this time of year is you really never know what you are going to catch. Every time a jig or a shrimp hits the water, there are over a dozen species that would love to call these baits dinner.   Lately it has been the Pompano, Jack Crevalle, Spanish Mackerel, and Ladyfish that have gotten to the baits first, but in another month it could be large Bluefish, Flounder, SeaBass and even Permit.

So with comfortable weather abound, and awesome fishing all around why not think of adding a Red Hot Fishing Charter to your Thanksgiving game plan.