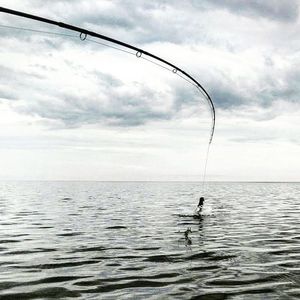 WOW! It’s hard to believe that we’re already heading into the second week of June and only a couple weeks away from our “World Famous” Scallop season. Before Nature Coast anglers start looking ahead to Scalloping local spin and fly anglers are still finding “World Class” Tarpon fishing along the shallow grass flats ranging from Crystal River to Homosassa. With the Nature Coast Tarpon season running from May 1st-July 1st now is the time to get on some of the Best Big Time Tarpon fishing found anywhere in the WORLD!! 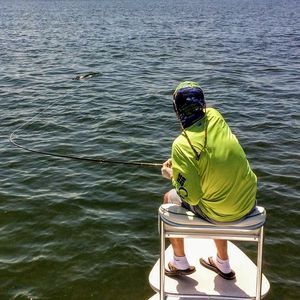 The later part of our May Tarpon season was highlighted with great weather and tons of Large Tarpon showing up early on our local flats. The cool foggy mornings of May have quietly given way to the heat, humidity, and afternoon showers that June Poon Chasers are accustomed to. Most anglers visiting the area this time of year will be hoping for Chamber of Commerce weather days but most Tarpon fishermen know that it’s the impending weather days that create the most memorable fishing experiences. Such was the case when I had the opportunity to fish with Neil and Sean Forest who made the trip down from Tallahassee, FL recently. Both Neil and Sean have fished with me in the past and Sean actually landed his first Tarpon on fly with me 2 years ago. Over our two days of fishing we were dealt with every weather condition possible in Florida. Wind, rain, clouds, fog and calm seas were all conditions that we experienced and surprisingly the fluctuating weather pattern was a catalyst for two incredible days of fishing. Over a our two day stretch we averaged close to 30 shots a day with Sean putting 4 fish in the air before landing a beautiful 120lb Tarpon that would be considered a trophy by most fly anglers. 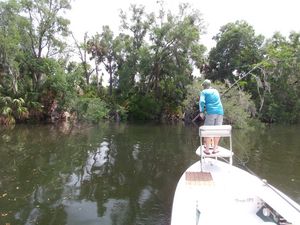 The changing weather patterns of June will mean changes coming to the migration patterns of our Nature Coast Tarpon. Baby Tarpon will start to become more prevalent in our backcountry waters and many bass fishermen will be shocked to find baby Tarpon staging around many of the same productive docks found in both the Crystal River and Homosassa Rivers. The real changes will be evident in the large migratory Tarpon that are roaming the deeper flats at this time. As water temperatures steadily climb towards 90° most fish will begin to find new foraging grounds on shallower flats closer to mangrove laden islands. The St. Martins Keys will become a prominent feeding ground for many Tarpon looking for one last meal before heading offshore to spawn. Savvy anglers will find free lining Live Pinfish, Pigfish, Whitebait, and Blue Crabs to hungry Tarpon will be a sure bet. Fly anglers will continue to have a plethora of opportunities as long as the offshore grasses stay offshore. With NOAA’s long term forecast calling for east winds for the next 10 days most of the flotsam should continue holding further offshore allowing for Black and Purple Toads and Chartruese Megalopsicles to continue to be the best bets for flies. 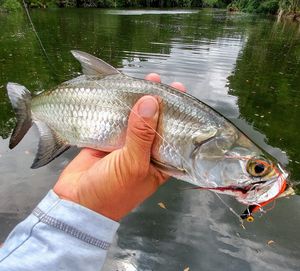