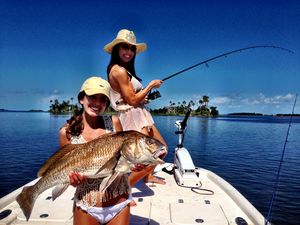 The Shallow Water flats off Crystal River, Ozello and Homosassa will be the epicenter this month for some of the best inshore fishing and scalloping action found anywhere in Florida. With limited amounts of rain and a majority of our days featuring beautiful sunny weather now is as good of a time as any to visit the Nature Coast. Not to mention with our area featuring over 20 different targetable species at the moment the sky is the limit as far as your fishing adventure could be concerned. 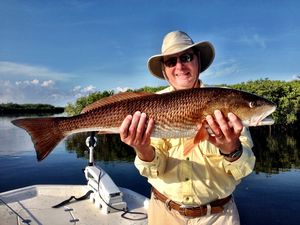 The featured species over the coming weeks has been and will continue to be the Redfish (Red Drum) and Black Drum. These are 2 of the Nature Coasts most reliable species by far this month. Both the Redfish and Black Drum are 2 very hardy fish, which are able to with stand a variety of extreme weather and water situations. When water temperatures plummet during the winter months these fish still go out of their way to feed. The same scenario plays out in the summer time as our water temperatures rapidly approach 90 degrees. The major difference when fishing these fish in the winter compared to the summer is that most of these fish tend to eat fewer times a day in the winter with most of their meals featuring larger prey. In the summer time these fish will do the opposite and eat many different times through out a day and most of their meals feature smaller prey. 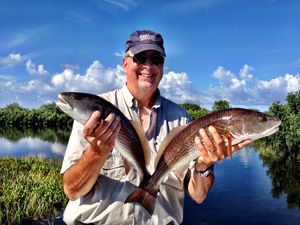 Over the next couple of months my boats will be loaded to the gills with all sorts of baits and lures in anticipation of targeting Oversized Redfish and Giant Black Drum ranging from 25-60lbs. Live Shrimp, Pinfish, Pigfish, Blue Crabs, Mullet, Ladyfish, and Lizardfish will all be used this month to tame these larger than normal fish. The months of August and September typically will yield some of the largest fish of the season and it pays to be ready with whichever baits these fish may be interested in. The live baits typically are the go to bait’s during the summer months but cut ladyfish, mullet and lizardfish are actually my favorites. Cutting a 1-2” chunk of cut bait is like ringing the dinner bell to a hungry Redfish or Black Drum. The trick to fishing cut bait is being patient and let the pinfish work your bait until a hungry Redfish or Black Drum gets the scent and inhales the bait. Cut bait is really just one big chum ball and as the little pinfish peck at your bait, pieces of the bait and scales travel down current creating a scent trail that most fish can’t resist. 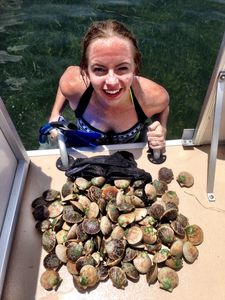 As Awesome as our fishing will be over the coming weeks, the talk of the town will continue to be our Fantastic Scalloping Action found here in Crystal River and Homosassa. There are a ton of varying reports out there about our scallop season and I will be the first to admit that our 2014 season has not been as good as our 2013 season. However, our area still features the best Scalloping in the state. The difference between 2013 and 2014 is the added scalloping pressure on our scalloping flats due to the great 2013 year we had. Now that school is back in session throughout Florida crowds will surely dwindle and our flats will begin seeing an influx in scallops once again.

STRATEGY: Try Scalloping during the last hour of the tide, all of slack tide, and the first part of the next tide. Weaker tides will allow all of the eel and turtle grasses to float vertically opening up areas where scallops will be hiding.